Last year’s roundup “10 Documentaries About Japanese American Incarceration You Can Watch Online for Free Right Now” has been one of our most popular blog posts to date. Since its publication, Densho content director Brian Niiya has been scouring the internet for more online documentaries and now adds four more titles to that list.

One of the most important films/videos on the Japanese American incarceration has recently (and seemingly legally) come online. It is The Nisei: The Pride and the Shame, a 1965 episode of CBS’s The Twentieth Century series—and possibly the first documentary film on the incarceration beyond the government propaganda films that were made during the war.

I think it is safe to say that in 1965, few people talked about the wartime incarceration, particularly Japanese Americans. But as part of the long-running documentary series The Twentieth Century, CBS decided to broach the topic, combining the stories of the Nisei soldiers with that of the incarceration story. The former was certainly better known than the latter at that time, having been featured in many books and articles as well as the feature film Go for Broke! (1951) and, just two years prior, as the subject of an episode of the ABC dramatic TV series The Gallant Men.

The Twentieth Century was at that time a fixture in CBS’s lineup. Running from 1957 to 1966, the half-hour documentaries covered a wide variety of topics ranging from recent history (“The Doolittle Raid,” “Hiroshima”) to biographies (“Man with a Violin: Isaac Stern,” “The Violent World of Sam Huff”) to contemporary issues (“Woman Doctor in Vietnam,” “The Supersonic Jet Race”). Each season’s complement of twenty-six episodes was sponsored by Prudential Insurance Company of America, which paid the full cost of production and commercial time. Both Prudential and the Department of Defense had approval over topics, though not on the editorial content of each show. The show drew eight to ten million viewers a week, and legendary newscaster Walter Cronkite narrated each episode.

So it was kind of a big deal when the producers of The Twentieth Century decided to take on the Japanese American story. Not surprisingly, they turned to the JACL for help, with National President K. Patrick Okura and Mike Masaoka reviewing the script. Both are also interviewed on camera, as are artist Miné Okubo, Daniel K. Inouye, legal scholar Eugene Rostow and General Mark Clark. In addition to newsreel footage of the incarceration, the episode includes film from the private collections of Dave Tatsuno and Eiichi Sakauye, as well as footage from the United Presbyterian Church that includes shots of Nisei soldiers visiting their families in the camps.

Viewed over fifty years later, it actually isn’t bad relative to the many other films made on the topic, and it bears a good deal of similarity in tone, content, and visuals with what was to come. It begins with the attack on Pearl Harbor and the recollections of that day by Japanese Americans. It then goes into the FBI roundup of Issei leaders, the push for mass removal of Japanese Americans from the West Coast, comparisons with Hawai’i and with the selective internment of German and Italian Americans, “voluntary evacuation,” then life in the “assembly centers” and War Relocation Authority concentration camps. The “loyalty questionnaire” episode is used as a transition to the story of the 442nd Regimental Combat team, climaxing with the rescue of the “lost battalion.” A brief summary of resettlement and the postwar years follows. Pride ends with the Supreme Court cases and Robert Jackson’s famous dissenting opinion in the Korematsu case, that “this loaded weapon is still a part of American law.” Many of the visuals, from newsreels and government propaganda, will be familiar to anyone who has seen more recent films.

There are some minor differences from most contemporary accounts of the events. Today, most such accounts at least mention the decades of anti-Japanese sentiment prior to the war to make the point that the wartime actions could be seen as a continuation of such policies and not so much as a one-time “mistake.” Of course, more recent accounts typically spend more on the years after the war, on the psychological effects of incarceration, on Japanese American “success,” on the redress movement. Given the times, it is somewhat surprising that we don’t get more of a “model minority” storyline here; instead the film more or less ignores the contemporary state of Japanese Americans. And more recent accounts also typically include stories of resistance as part of their narratives, something that is mostly absent from early accounts such as this. (There is a brief mention of those who protested the loyalty questionnaire and who renounced citizenship “to protest imprisonment.”)

The filmmaking style is also quite different. In particular, the interview clips are much longer and seemingly more rehearsed; you can even see some of the interviewees looking down at notes as they talk, something you don’t see in more recent documentaries.

But perhaps the most interesting aspect of the film is the presence of Mike Masaoka. Though a legendary and famous (or infamous) figure in our history, there are few clips of him speaking, since he passed away in 1988, before the vast majority of films/videos on the topic were made. Reputed to be a great and charismatic orator, that talent doesn’t really come across in his interview segments—one on his recollections of Pearl Harbor Day, the other a lengthy assessment of the roles John DeWitt, Earl Warren, and Walter Lippmann played in the run up to Executive Order 9066. Around fifty years old at the time, he comes across as stilted and wooden by contemporary standards, but also sounds authoritative. It is an interesting glimpse at a rarely seen historical figure.

Though Prudential was apparently uneasy about the show, it did agree to sponsor it, and it aired on January 31, 1965. However, Prudential also requested that the show not be rerun. Prudential and CBS did make the show available on film for screenings by educational and community groups as it did all episodes of The Twentieth Century. It seems to have been shown a fair number of times in subsequent years, perhaps most notably as an accompaniment in some venues to the landmark 1972 exhibit Executive Order 9066. Seven years later, in 1972, NBC produced the second major network documentary on the topic, Guilty by Reason of Race.

A few other online documentaries worth watching are:

One of two documentaries by Lucy Ostrander and Don Sellers that explores aspects of the history of Bainbridge Island, Washington. The Red Pines is a brief history of the Japanese American community on Bainbridge, going back to the late 1800s and extending to the present, covering the community’s World War II experiences in the process. Much of the story is told through Junkoh Harui, whose family began Bainbridge Gardens. Another interviewee, Fumiko Hayashida, would become the subject of another documentary by Ostrander and Sellers, Fumiko Hayashida: The Woman Behind the Symbol (2009). [Editor’s note, March 2020: Unfortunately this documentary no longer seems to be available online.] 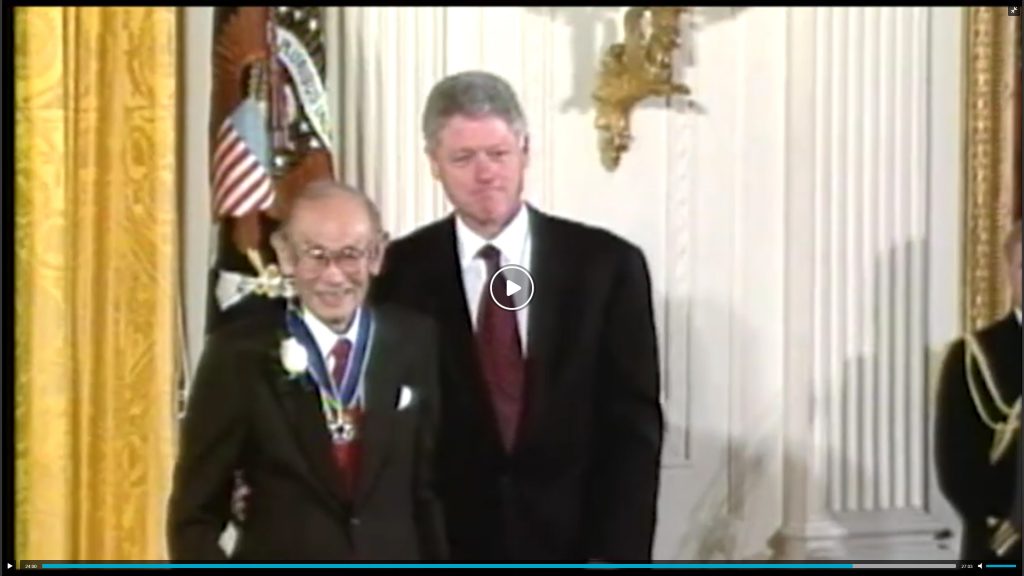 Straightforward recent documentary (2012?) that focuses on the civil liberties implications of the Korematsu case as part of a civics curriculum presented by the Annenberg Foundation. Focusing as it does on the legal implications of the case, it lacks the emotional impact of other films on the legal cases such as Steven Okazaki’s Unfinished Business (1985) or Eric Paul Fournier’s Of Civil Wrongs and Rights: The Fred Korematsu Story (2000), which include more on the key individuals and on the broader impact on the Japanese American community. Korematsu and Civil Liberties does have one of the most impressive rosters of interviewees of any such film, including two Supreme Court justices, along with eminent legal scholars, historians, and Japanese American community leaders.

[Header photo: Still from The Nisei: The Pride and the Shame]